The Power is yours… Quote No.87 “Encourage Yourself Encourage Other” 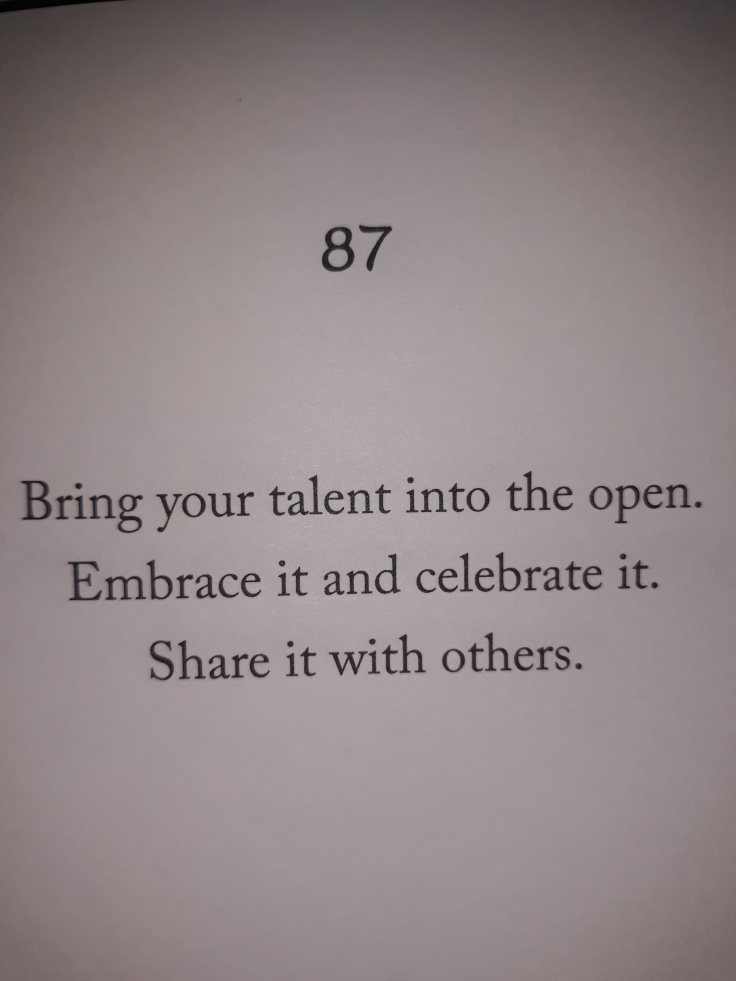 Quote No.87 from Encourage Yourself Encourage Others by Anne Devine.

While we are in lockdown maybe it’s an opportunity to unlock your talent.  Take advantage of time, nurture a dream you have had…”Embrace it and celebrate it. Share it with others.”

The Power is yours… Quote No.91 “Encourage Yourself Encourage Other”

To check out the backstory The Power is yours… Quote No.99 “Encourage Yourself Encourage Others” 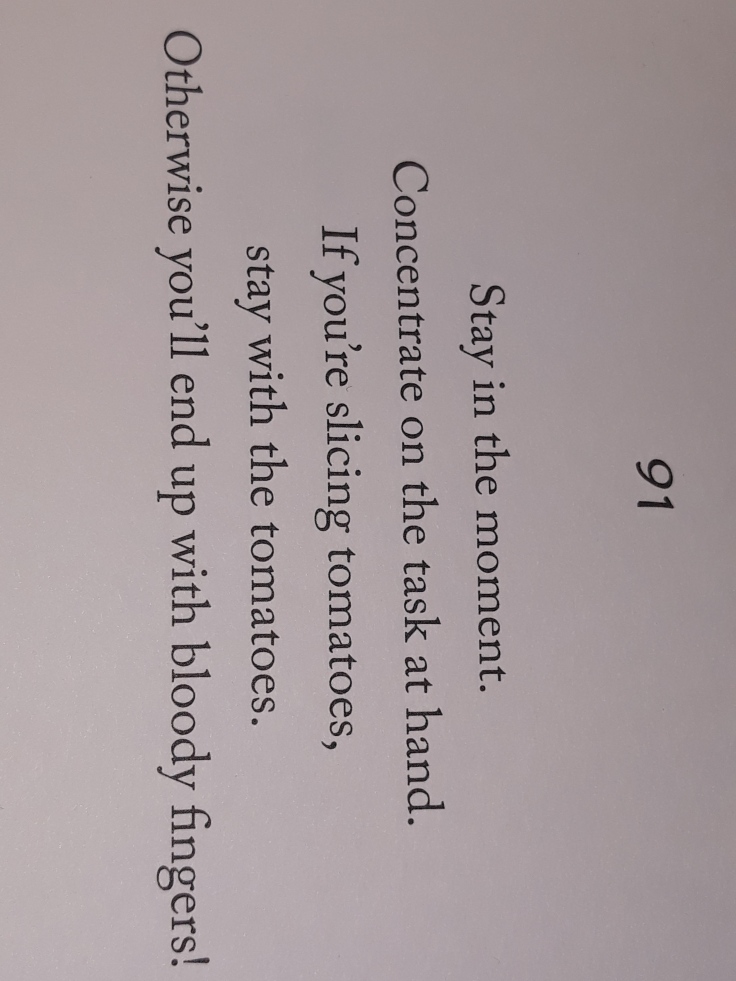 Did you have to adjust your phone or other technology in order to read this quote?

Did that throw you off momentarily?

I’m deliberately trying to pull you into the moment. I’m hoping to take you out of the trance of daily life.  Out of autopilot.

A few weeks ago we spent a lot of time in autopilot, thinking of everything we had to do.

Today we have an opportunity to stay with those tomatoes…

because we have been given the gift of time!

Bullying & Beyond…You can make a difference

The following “Tips for a better internet together” offers some very practical advice which I’d encourage parents and guardians to discuss with their children.  These simple tips could make a big difference to someone who is experiencing bullying.

“1. Reach out to someone you know is being bullied.  A simple message of support, a like, or a smile can be enough to give hope to someone who feels alone.

2. Include someone you see being isolated.  Invite them to sit with you at lunch, include them in a chat, share jokes with them.

3.  Make a clear statement that you think bullying is unacceptable and not just another part of growing up.  Sharing or liking anti-bullying messages on social networks is a simple way of doing this.  You might even go further and create your own.

4.  Say ‘No’ or ‘Stop’ when you see someone behaving unfairly.  Standing up takes real courage but not doing it is the same as giving your permission for someone to be bullied.

5.  Get help from an adult if you think that standing up to a bully might put you at risk of being hurt or becoming the next target.  You might not always be able to fix things without putting yourself at risk, but you can always do the right thing – and that means getting help.  In fact telling a parent or teacher is usually the moment when the situation stops getting worse and starts being dealt with.

6. Report it.  All good schools and clubs have ways for you to report bullying incidents.  Find out what they are and use them.  You can also click the report abuse button on websites like Facebook and Twitter.  They all have to take reports seriously and remember they won’t reveal the identity of the person making the report.

7.  Don’t bully back no matter how angry you feel.  You should never accept bullying but don’t cross the line and bully the bully.  It’s ok to point out that the bullying should stop but it’s not ok to send abusive messages in retaliation.  It makes it more difficult to get help from your school.  They might even end up punishing you too.”

MySelfie and the wider world

What advice do you give your children if they see someone being bullied?

I have been writing on the topic of bullying since late last year and I greatly appreciate all the support, encouragement and insightful feedback and comments which I have received to my Bullying & Beyond posts!

In order to access the most up to date information available on bullying and gain some insights and understanding of the Government’s education policy regarding the prevention of bullying,  I decided to join a blended learning programme being offered by NABC; the National Anti Bullying Association of Ireland, entitled Bullying Prevention & Intervention Online Course for Teachers.  It is a ten week online programme which also includes two face to face sessions in DCU, Dublin City University, St Patrick’s, Drumcondra, in Dublin.

And so, I would like to invite you to share your thoughts with me and in doing so, help me inform my answer to the first question we have been posed…

“What do you think are the greatest challenges teachers face when dealing with bullying behaviours?”

I look forward to your thought provoking responses!

This morning while cooking breakfast, I noticed the bubbles forming and bursting on the surface of my porridge; intent upon their job.  I held onto those air trapped moments, soaking them in! It’s difficult to explain the sensation of absolute awareness that I felt, other than it being a feeling of enhanced appreciation and total bliss.  Life was beautiful; just bubbles and me!

How often do you engage fully in the moment?  Can you describe the sensation?

Anti-bullying training for teachers that is evidence based and backed by up to the minute research is vital if students are to have access to the best possible education in an educational environment that is bully free.

Calling All Teachers to Register for Anti-Bullying Schools Programme

“The FUSE programme is part of the Department of Education and Skills Wellbeing Framework and supported by the NABC, ISPCC and Dublin City University, and funded by Facebook. To run FUSE in your school and learn more about the programme please visit the FUSE website: https://antibullyingcentre.ie/fuse/ or please contact us on Tel: 01 884 2012.”

I radiate because of you… my husband, my child, my friend, my fellow blogger…

I radiate because writing has opened up pockets of opportunity for self-expression, possibility and growth…

I radiate because tomorrow it might be too late to radiate…

…because I can share hugs that replaces words and tell you that you radiate the world to me!

When your child is being bullied at school, it is important to reach out and find professional support.  There is a lot of qualified support out there but it is very important to find a counsellor that you and/or your child can relate to.  The trust you build with your counsellor is vital to the healing process.

Shame is an important aspect of bullying and an aspect I’d like to raise awareness of.  Teachers carry a heavy task, large class sizes and a wide variety of needs to be met but I think it’s important, for parents and teachers, to be very aware that children remember shaming remarks and wear them like a label, long after the event. The emotional growth of children is stunted if they are shamed in front of their siblings or peers.

This experienced and knowledgeable gentleman played an important part in providing insights that helped us heal our family.  Of course when you gain insights from counselling, you can choose to learn from them and use them to heal your family or if you so wish, not learn from them or use them.  At the end of the day, the path you choose is up to you…

Shaming remarks made to children under twelve have a more drastic and permanent impact that can become core because, like parents, teachers spend a lot of time with them, and the frequency of these remarks is a key element in laying the crop of shame. A combination of parental and teaching shaming is particularly damaging and reinforces the sense of not being good enough in the child. We can choose not to shame any child. Education is not just about intellectual or cognitive development, it must include emotional nourishment as well, which is facilitated by praise and allowing children the space to interact with each other. So, I will leave this part of the blog with a simple poem by an unknown poet on the practical difference between shame and praise –

“I’ve got 2 A’s” the small boy cried,
His voice was filled with glee
His father very bluntly asked
“Why did you not get three?”

“I’ve mowed the grass” the tall boy said
“And put the mower away”.
His father asked him with a shrug,
“Did you clean off the clay?

“Mom, I’ve got the dishes done,”
The girl called from the door.
Her mother very calmly said
“And did you sweep the floor?”

The children in the house next door
Seemed happy and content.
The same things happened over there,
But this is how it went:

“I’ve got 2 A’s the small boy cried,
His voice was filled with glee.
His father very proudly said
“That’s great! I’m glad you live with me.”

“I’ve mowed the grass,” the tall boy said
“And put the mower away,”
His father answered with much joy,
“You’ve made my happy day”

“Mom, I’ve got the dishes done”
The girl called from the door.
Her mother smiled and softly said,
“Each day I love you more.”

Children need encouragement
For tasks they’re asked to do
If they’re to lead a happy life,
So much depends on you.

and she’s in the kitchen

They are cooking up a symphony

That will paint Ireland pinky red

As they succeed in bringing

Together they have lobbied politicians and the

To compile a proposal to Government

With them to public places

Just as users of Guide Dogs for the blind

Or Autism Support Dogs have benefitted

From their canine companions

And Doris will be an “extraspectacular” Psychiatric Assistance Dog

Being the first of her kind in Ireland!

Did you know that…

Magenta is an “extraspectral” color.

Sir Isaac Newton noticed that magenta did not exist in the spectrum of colors from white light when he played with prisms.

But when he superimposed the red end of the spectrum on to the blue end, he saw the color magenta (this can be done with two prisms to make two spectral spreads, “rainbows”):

For more interesting facts and optical illusions  check out…

Create Space
Create a free website or blog at WordPress.com.